Foreign Trade Relations in Sri Lanka in the Ancient Period: With Special Reference to the Period from 6th Century B.C to 16th Century A.D.

This article by J.M.Sudharmawathei has been published in Humanities and Social Science Review in 2017. The article is reproduced here because of the academic and historical significance of the proposition it highlights – that ancient Ceylon was not an isolated island depending upon agriculture as popularly known in history books, but was a trade hub in the global trade. This fact has enormous significance to refute some of the misconceptions as to its home-grown knowledge, while, in fact, the island’s global trade opened for it the windows for global knowledge in various fields. In any event, the lack of its technological advancement was occasioned by its monarchical political system coupled with feudalism, which extensively exploited human labour for enormous construction work, not necessitating any development of advanced tools, science and technology. These remain areas of research to be explored.

Foreign Trade Relations in Sri Lanka in the Ancient Period: With Special Reference to the Period from 6th Century B.C to 16th Century A.D. Download 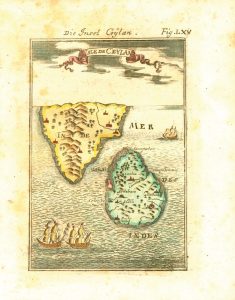 Foreign trade is one of the prominent feature of Sri Lankan economy from the ancient times. According to some views ancient Ceylon was inhabited by foreign traders who arrived the country from neighboring countries. According to the chronicles, Ceylon had been populated from the 6th Century B. C. The maritime trade of the Indian Ocean can be traced back to the dawn of civilization when as early as the third millennium B. C., the Harppan merchants of India traded with Mesopotamia through the ports of the Persian Gulf. Up to the time of 8th century A. D. foreign trade activities in the Indian Ocean were carried out by various nations such as Persians, Ethiopians and Chinese and many others. After the 8th century B. C. most trade activities were conducted by Muslim trades in various Islamic Countries. Sri Lanka had been the central point for all these traders. It is apparent that Sri Lanka has engaged in trade with many countries from the ancient times. It includes Greece, Rome, Persia. India, South-East Asian countries and with China, the farthest country towards the east. Accordingly, Sri Lanka had been treated as the main land mark for foreign trade in the Indian Ocean. From ancient times Sri Lanka had been treated as the main meeting point of the traders bringing their goods from the East and the traders coming from the west though Persian bay and Red Sea. The main objective of this research is to investigate the factors contributed become Sri Lanka a popular trading center in international trade activities during the prescribed period under consideration. Primary and secondary sources including information from chronicles, inscriptions and archeological remains were adapted along with foreign documentation and reports. Geographical location of Sri Lanka has substantiated the possibility of maintaining trade relations with foreign countries. As the sea routes towards the east and west were located through Sri Lankan sea, this island had become a popular seahalt on foreign voyages. Sri Lanka had become so popular among international traders because of the fact that there were several harbors located around the island that can be anchored any vessels. The importance of harbors situated in Sri Lanka had subjected to remarkable charges from time. However the significance of every harbor has remained unchanged at all times. The main harbor during the Anuradhapura period was Mahathiththa. It existed up to the 14th century. When Mahatiththa become out of use, the other harbors in the southern and western part of the island become prominent. According to the sources reveals another important factor is that Sri Lanka is situated very close to India. Another fact the foreign traders attracted towards this small island is that the enrichment of the country with many valuable natural resources such as pearls, gems, elephants, ivory, and spices namely cinnamon, pepper, clove including many other varieties which were high demand in international trade.

theRepublic.lk aims at developing critical knowledge on concepts, principles and philosophies of public law from an interdisciplinary and internationalist approach. It encourages its readers and contributors to engage in critical legal studies from a Class Approach to Jurisprudence and International law.